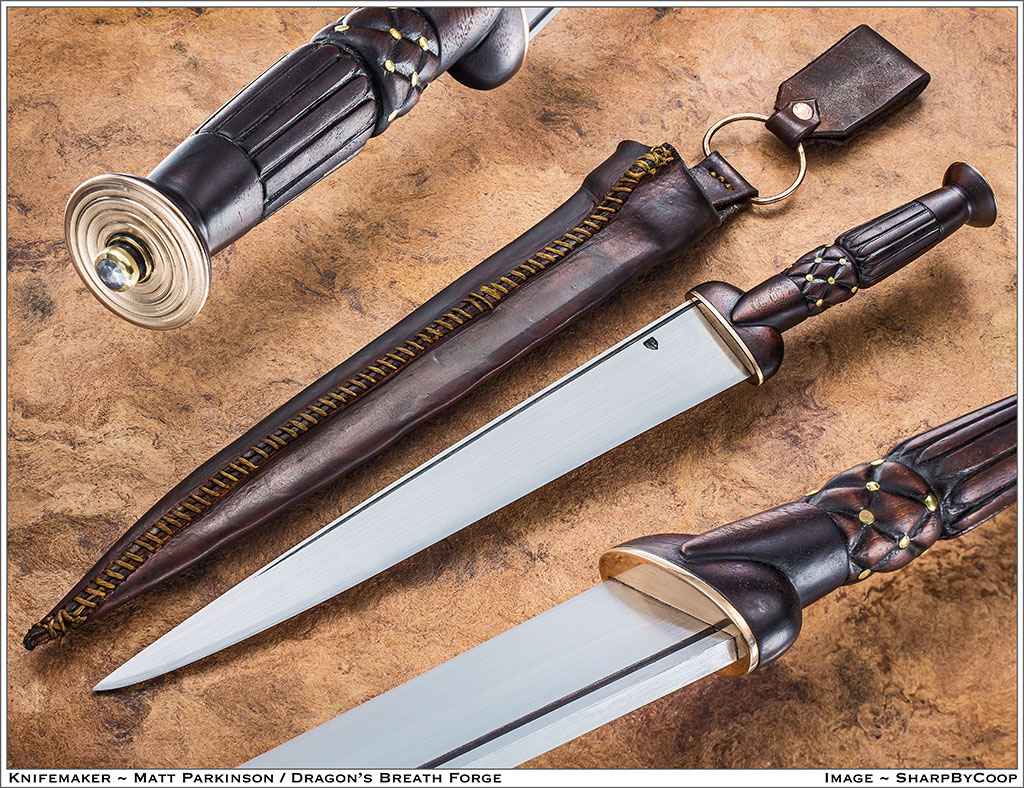 Drawing –to make a bar longer and thinner

Upsetting- to make a bar shorter and thicker

Scarf- the pre form shape for a forge weld

There are seven steps in making a hook:

In blacksmithing jargon the term drawing out means to forge the stock longer and thinner. This is the most basic operation and one that almost every blacksmithing project will use. In this case we will be drawing out a point.

When drawing a point always begin by drawing the shortest point you can and then forging out a longer taper from there.  It is quite easy to make a taper longer but almost impossible to shorten one.

To begin, take a forging heat ( a bright red or orange heat). Standing at a 45 deg. angle to the anvil lay the stock across the narrow width of the center of the anvil. Lift the bar so that only the point of the bar is on the anvil (near the far edge of the anvil). Now strike the end of the bar at the same angle that the bar is held from the anvil.  After two or three blows, rotate the stock 90 deg. and repeat until the point is forged in. To lengthen the taper decrease the angle that you are holding the bar and the angle you are striking at, and work the blows up higher on the bar.

After forging the taper, then the scroll one the end of the bar, take a forging heat and quickly cool the scroll in the slack tub (but just the scroll).  Then working over the horn of the anvil, bend the hook shape by hammering on the scroll and working the curve around the horn.

Most traditional ends on forged ironwork are done basically the same way. A bean end , flame tip, spear, or leaf point  only differ in how the end is prepared before setting down and how the material is moved from there.

For a flame or spear point, a short taper is forged on the end of the bar. Next a forging heat is taken and the bar is set on the anvil so that only the very end is on it (just a little past the end of the taper.) Then the end is set down and the offset material is flattened shaping the end. For greater width a pass with a cross peen is used to push more of the material out to the sides.

Upsetting is the reverse of drawing. That is making the bar shorter and wider.

First chamfer (a chamfer is a beveled edge connecting two surfaces) and square the end of the bar to be upset. This can be done with files, a grinder, or with a hammer. The purpose of the chamfer is to help concentrate the energy in the center of the stock. This allows the stock to expand more evenly and much more easily.  Next take a bright yellow heat. Heat just the end of the bar and no more than 1” or so of the stock. Hold the stock vertically over the anvil and strike straight down onto it with the hot end of the bar. Repeat until the desired thickness is obtained. Correct any bending before continuing.

Forge welding depends on three things to be successful:

These three things are put in place via the flux and heat. At welding temps the flux will strip away the oxides on the surface and reveal a clean surface below. The flux will also seal off the joint creating an inert atmosphere.  When struck, the metal will push the flux out of the way and come into perfect contact. This kind of welding is also call solid state welding.

To forge weld a scarf must first be forged on the two sides of the joint. The scarf ensures that the flux will be forced out of the joint and not be trapped in the weld.  Next a heat is taken and the joint is wire brushed until cool (this removes much of the scale giving the flux a helping hand). Then the joint is reheated to a dull red and flux is applied to the joint.  In a CLEAN fire (a coal fire with no clinker) the joint is heated to a bright yellow heat and quickly taken to the anvil. Strike the center of the joint with a good blow to set the weld and then work the joint with firm blows until it is to shape or has cooled down to a red heat. If the weld took the whole joint should cool at the same rate. If there are cool spots, these are areas that the weld did not take. Wire brush and reflux any areas that didn’t take. Take another welding heat, then re-weld any areas that didn’t take and then finish forging the area to shape.

Drifting is shaping or expanding the inside of a hole with a tapered tool called a drift. To drift a hole, heat the section to be drifted to a yellow heat and drive in the drift. Support the back of the hole using the hardie (square hole) on the anvil. Or if available, use one of the holes in a swage block. Drive the drift in about half way from one side then knock the drift out.  Reheat the stock and cool the drift. Drive the drift in the rest of the way from the opposite side to complete.  Use oil or grease on the drift to help keep it cool and to ease the drifting process. If the walls of the hole need to thin much to accommodate the drift stretch the walls first  with a hammert and then use the drift to reshape the hole. If the drift is used to stretch the hole the material will stretch from the thinnest spot and never even out.

Begin by bending a 6-7” section over the anvil or in the vice.  Forge this bend into a hard 90 deg corner, then bend the 6- 7” section to form a centered loop over the horn of the anvil. (loop could end up approximately 2” in width.  Cool this side of the bar and heat the other end. Draw a taper about 3” long and down to a 1/8” point (or a little smaller) take another heat higher up and fold the last 4-5” of the bar (including the taper) back onto it’s self. Flux and forge weld the last 1” then draw a short point onto the end or the bar. Take another heat and clamp the point in a vice then bend out the first taper out shape to finish the end of the poker. Twists can be added at this time to decorate the poker this is also useful addition if the point is out of plane with the grip.

The loop on the end of the poker can also be forge welded as shown in previous section.

Once the second bar is forged, trim the rein ends to about 6” long.. Now draw thee reins out to 10-12”. A long tapper to the reins works better allowing the reins to be springy, giving a more secure hold. Easing the edges of the reins by working the corners down will give a more comfortable grip.

Now assemble the tongs using a 1/4” rivet (1/4” by  3/4’ should work well). Set the rivet tight. Heat the joint section in the forge and move the tongs back and forth to free them. Quench and continue to move the tongs to completely free the joint and give a smooth movement to the finished tongs. Adjust the tongs to fit what ever stock they will hold, by heating the jaws and inserting a scrap piece of the material in the jaws, then clamping the jaws in a vice and pulling the reins apart to a comfortable grip.