Striving to bring grace and beauty into the everyday. Creating objects to last lifetimes.

We strive to create work that meets both a high aesthetic standard as well as a high performance standard. Everything we make is hand-forged and one of a kind and refined to meet our high quality standards. We are proud of what we produce here at Dragon’s Breath Forge and we know you will be proud to own it! 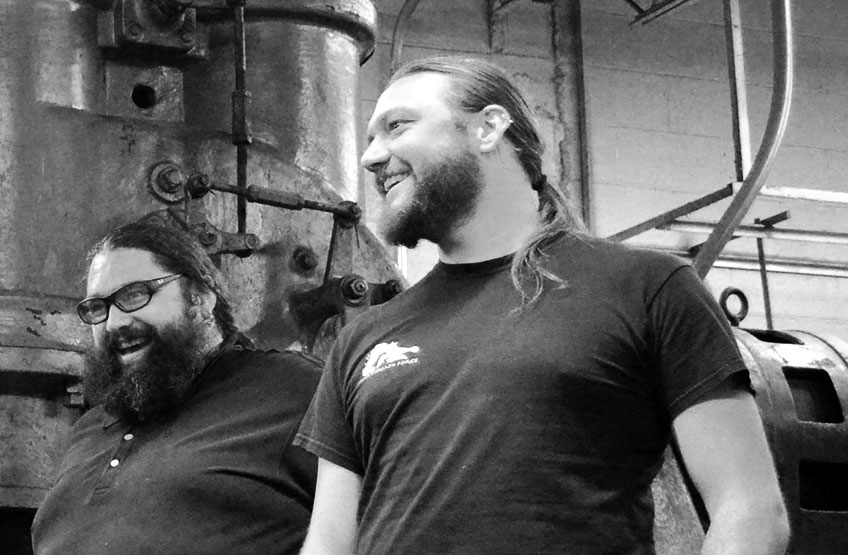 One of our goals is to share our passion for the craft with the world.

We do this not only through our work but also by hosting events, classes and producing videos. Individually we bring our passion for the craft to several organizations including the American Bladesmith Society, the Society for Creative Anachronism, and the Artist Blacksmith Association of North America. Our work has been published around the world and we have given workshops and lectures across the country. Within our 6000 sqft shop, we hope to create an open forum for creativity and growth.

Jamie graduated from Wheaton College in 2002 with a BA in Studio Art with a minor in Technical Theater. Over his summer vacation in 2000, Jamie decided to take a class in fine metal working at the Museum School of Fine Arts in Boston. There, he found his passion for manipulating metal. He contacted Peter Swarz-Burt, a Connecticut smith with a well-appointed shop, to pursue an apprenticeship. As Jamie puts it, “through a bit of nagging I managed to convince Peter to keep me on and we’ve become good friends over the years.”

In 2015, Jamie appeared on the first season of the popular History Channel show, Forged in Fire. To see the outcome, watch episode 7: The Roman Gladius.

Jamie has an interest in Viking history, and has made a study of museum pieces, source texts, and lectures to inspire his work. You can see the influence of those efforts in the swords, seaxes, and jewelry that he has created.

Jamie also participates in SCA medieval style fighting, and you might be surprised to hear that he assumes a Viking personality during events and battles. He creates much of his own equipment for such events, including ornamentation (“viking bling”), armor, helmets, and shields. In 2019 Jamie was awarded the honor of Laurel for bladesmithing in the East Kingdom. 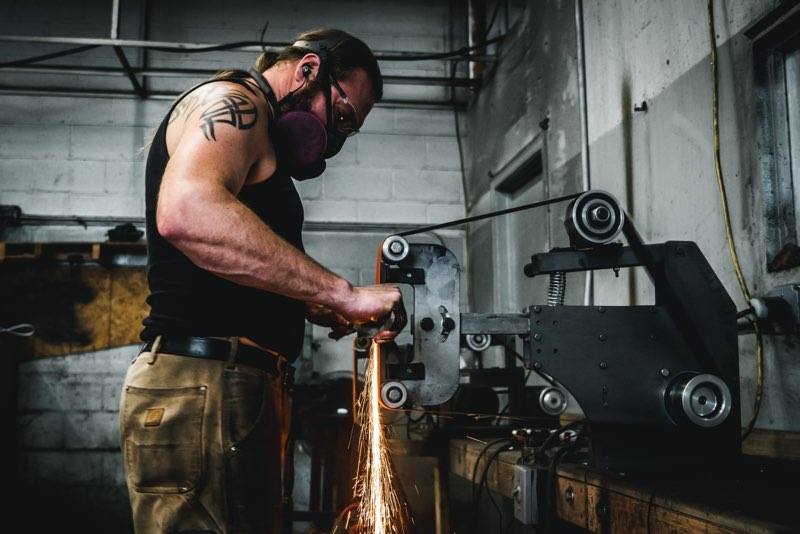 A beer to go with tonight's sword forging @alvariu

This is how I get more interesting patterns in my

Sometimes, I get distracted by things. Some of tho

Just finished up this mosaic sword and knife set.

Inished this little axe up. It is an interesting v

I was inspired as a child 6-8 years old watching a Blacksmith work at Sturbridge Village, a living history museum. This seemingly small moment stuck with me my whole childhood. As a young teen, I began to experiment with metalworking, my first foray into knives was making a (very bad) knife under the direction of my grandfather from an old file. These were the first of many moments that inspired me and set me on the path to learning both forging and knifemaking. These moments were the  beginning of my long journey into blacksmithing and bladesmithing.

After graduating from the Manufacturing Engineering Program at Vinal R.V.T.S, I worked in a factory for a few years before going into business for myself in 1998. I started my first business MP Metalworks making ironwork, swords and knives for the Rennaissance Faire market, as well as doing small blacksmith and ironwork projects outside of Renn Faires. In 2005 I closed MP Metalworks and together with Jamie Lundell and Peter Swarz-Burt formed Falling Hammer Productions LLC, and later Dragon’s Breath Forge.

I began teaching in 2007 and have taught at NESM, Peters Valley School of Craft, the Guilford Arts Center, the Brookfield Craft Center, the Adirondack Folk School, the Marc Adams School of Woodworking, the ESSA School and Grizzly Ironworks, as well as teaching at the FHP/Dragons Breath Forge shop.

My work has been featured in Blade Magazine, Knives Illustrated, Knife Magazine, Messer, Excalibur, Knives Annual, and Pirate Quarterly. I have written several articles for Knife Magazine, and write a column every other month in that magazine as well. For years I have threatened to finish my book on bladesmithing…I may yet follow through.

In 2015 I was the winning competitor on the first episode aired of “Forged in Fire” on the History Channel, making a Katana in 5 days that split a bullet. I returned to Forged in Fire in 2016 for a champions round and placed second this time with a bullet-splitting Scottish Claymore.

In 2016 I attained the rank of Journeyman Smith in the American Bladesmith Society. I plan on testing for Master Smith hopefully in 2020 having already passed the performance portion of the test in 2018.

I am vice president of the Connecticut Blacksmiths Guild, I was a long time member of CBG, but was only ever able to make it to a few meetings a year so was never very active. However in the meetings I was able to attend, I would always learn something useful. Many of those early lessons have served me well in the 20 years I have been smithing and it is my hope that I can help do the same for the next generation of smiths.

This is an exciting time for smithing, no longer are we just the guys that shoe horses. There is a greater/growing public awareness for the craft, in its many facets with Forged in Fire being the the most public expression of this new forging renaissance. Even before FIF there was so much enthusiasm around smithing, with massive Facebook groups with tens of thousands of members exchanging ideas, Youtube videos with millions of views.

It is not my goal to be the best at any one thing, I do not desire to be the “best bowie” maker or “best damascus” maker. I want to be very good at a wide range. I want to be able to make anything, to be able to dive deeply into whatever form interests me. What ever calls to me, for me this work is a calling and a huge part of that calling is to pass on what I know. 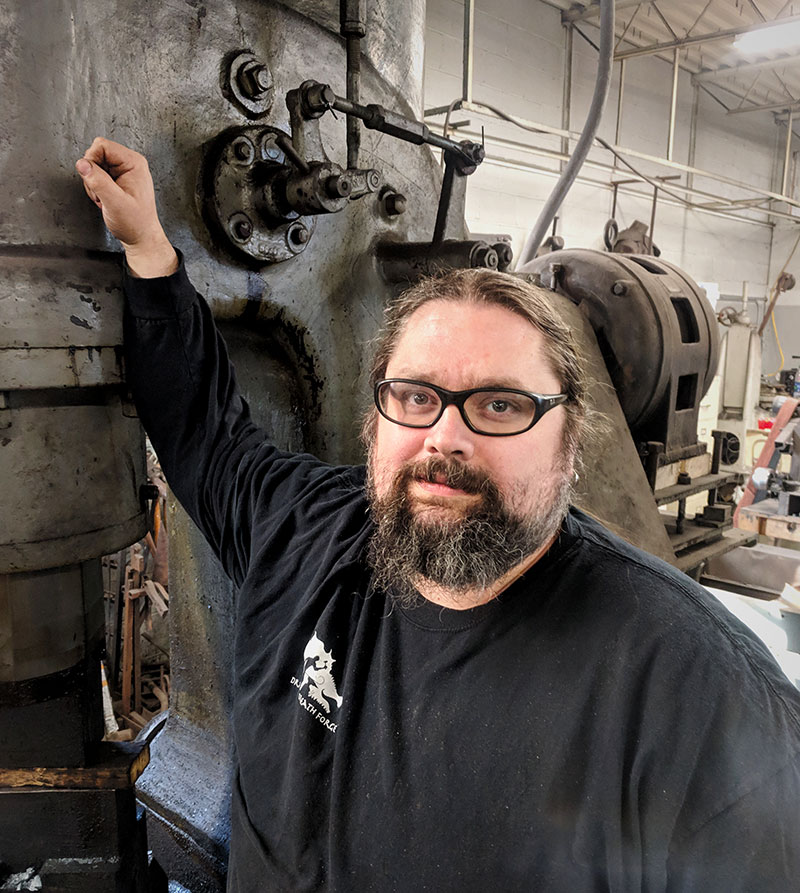 Schools I have taught at:

Awesome photo from best in the biz @sharpbycoop t

Finished but for the scabbard 33" blade 44" over a

Getting closer need to etch this a little more bef

Blade sanded out and mark added . A touch of engra

I started making knives back in1987 in a coal forge.  There was no internet so all I had for guidance was a couple of books. In 1995 my daughter was born and I set aside bladesmithing. In 2011 I picked it up again, going to the New England School of Metalwork for classes. I took a lot of classes over the years and built a shop in my backyard, forging after work. In 2017 I retired from my day job and started bladesmithing full time.

My work tends to focus on northern European blades from about 500-1100AD. I have done pieces from earlier and later periods, but this period is a kind of aesthetic gravity well for me.  I love the complexity, expression, and organic nature of the art from this time period, in contract to the more Spartan and geometric styles that occur after the arrival of Christianity.

If I have a specialty in types of blades it is definitely swords, with a focus on Viking era blades. I love the challenge of making a sword that handles instinctively. It’s much harder than it seems, and involves careful and subtle shaping of the blade to prevent it from handling like a club. Swords should be light and fast, and facilitate the kinds of maneuvers one makes in the fighting style it’s intended for. In addition to swords I also make seaxes and period jewelry.

My technical specialty is lost wax carving and casting. I was a sculptor in college, which is where I first encountered lost wax casting. I have pursued training in it ever since.  Lost wax casting allows me to create sculpted hilts, guards, and pommels that would either be impossible or prohibitively expensive to reproduce without casting. Despite a career as a software developer I don’t use 3D modeling or printing. All my models are hand carved. I like the character and what I call “biological symmetry” of hand carved work. Computer designed and produced pieces are too perfectly symmetrical for my taste, and simply don’t look like the historical pieces they are trying to recreate. 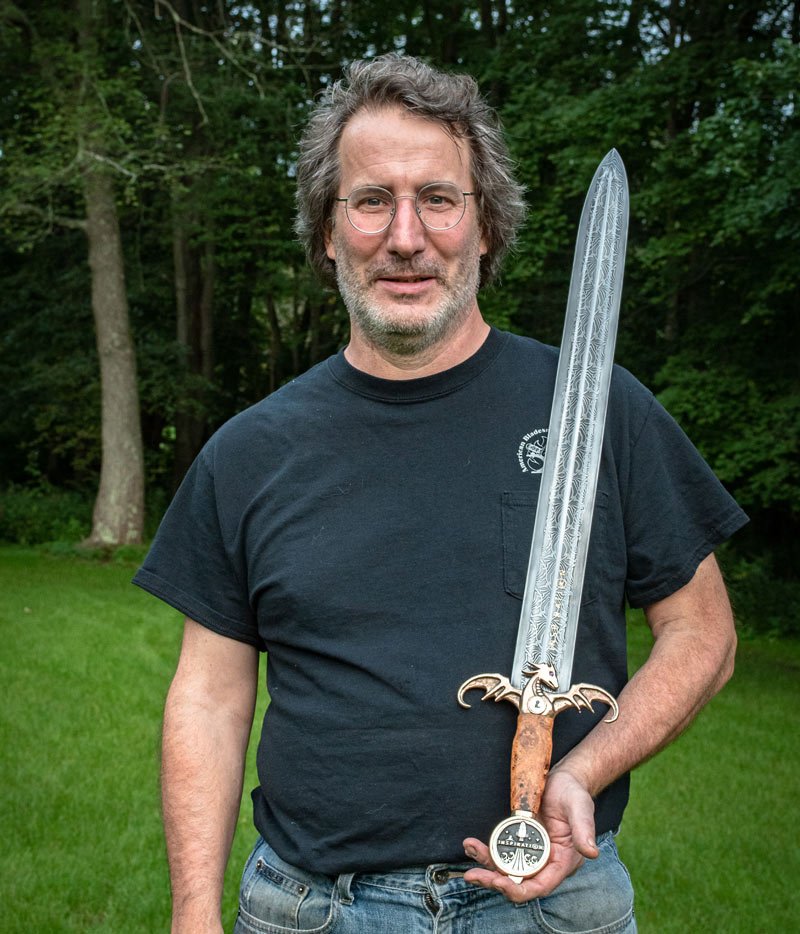 “If you think there’s an idiot in the picture, first make sure it’s not you.”

Engraving some decoration on the front of a Celtic

@sunandstarsforge came down over the weekend and w

A little holiday scabbard work. Gluing the core to

Making progress on the Kirkburn sword. On to the s

Made some big-ass ‘arrowheads’ today. They are

And then there are THOSE days… Busting out a 20m

Help us bring education (and entertainment!) to the community

As part of our effort to share our expertise and love for our craft, we have started a Patreon page to host a variety of video tutorials. We already have several free videos there and will be adding more over the coming years. There will always be some available for free, while others will be exclusive to those who choose to support us in our efforts. The more support we get the more content we will be able to provide!