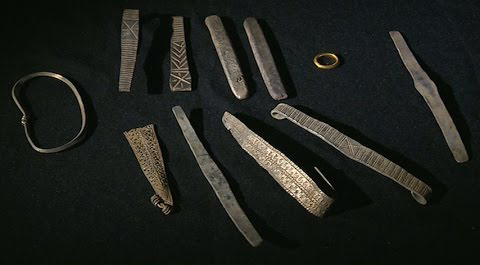 In this projects, I was attempting to replicate an arm ring that was part of a Viking hoard recently unearthed in southwest Scotland. Beyond the arm rings and other items that were found, there were also ingots of silver and gold, which I wanted to use as my starting point for making the arm ring. 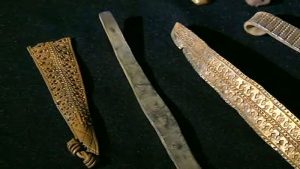 The arm ring that inspired me (right)

Pouring of the Ingot

To start the process, I gathered up scraps of bronze and placed them into a crucible, which was in turn placed into a propane furnace. Historically a charcoal furnace and hand powered bellow would have been used for the melting of the metal. I use propane because it burns cleanly, and I have not yet had time to build myself a charcoal furnace. The Vikings would have used soap stone mold, which would be rectangular in shape. I used a piece of angle iron, which made a triangular shaped ingot. Working with this shape presented some difficulties. 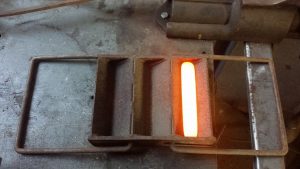 The ingot has been poured!

Because of this shape, the material in the center of the ingot was stretched significantly more than the edges. This caused quite a bit of stress on the edges, which caused them to fracture in my first attempt at forging it out. After seeing this, I cast a thinner ingot that, thankfully, did not have the same difficulties. All of this could have been full avoided if I had started with a rectangular ingot, like the ones found in the hoard.

Forging out the Arm Ring 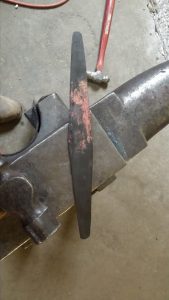 After the ingot was forged at, I began forging in the profile. All of the forging was done hot, at a dull orange or red heat. The temperature at which the material is forged is all dependent on the type of alloy. Most gold and silver forging is done while the metal is cold. Frequent annealing cycles are needed to keep it soft, as all metals (with the exception of gold) will work harden. If hardened metals are hammered on they will fracture.

After the final shape was forged, I removed the oxides on the surface with a belt grinder and scotchbrite belts. This gave me the desire surface finish for the final project. 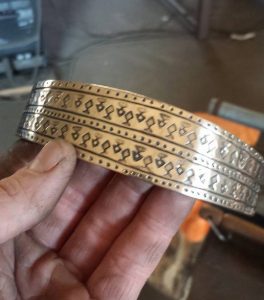 Now it was time to create the punches needed for making the designs on the arm ring. This was done with files and a center punch. I used a bar of O1 tool steel, which after shaping, was heat treated and tempered.

At this point I laid out lines and began my punch work. When looking at the pictures of the pattern, I had a hard time determining the exact design I did my best to have my final product as similar to the original as I could, however I will admit that from just looking at pictures it was difficult to get an idea of scale and proportion. The final step was to use a wooden mallet to form the ring over the horn of the anvil.